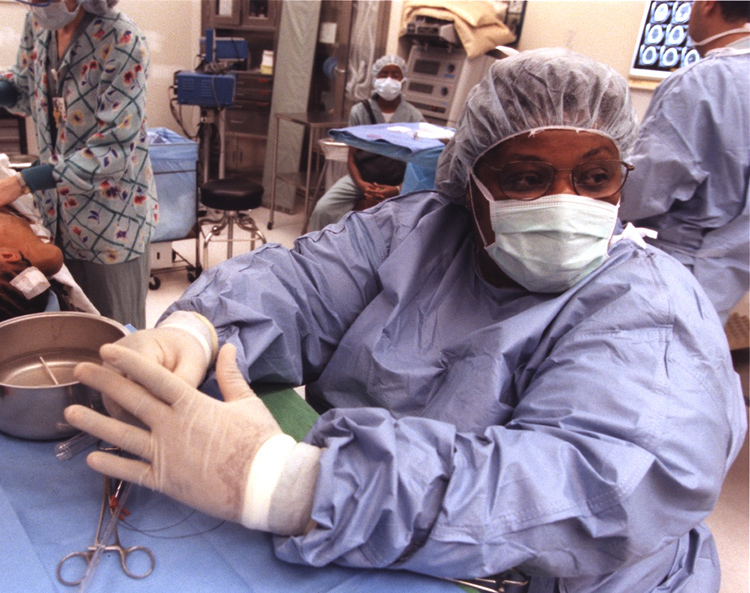 March 8 is International Women’s Day, a day to recognize the social, economic and political labor that women contribute to the world across all racial, cultural or religious differences. ABIM would like to honor the many contributions that women physicians continue to make to the medical community for the benefit of society at large. Share your own story on Facebook and Twitter using #InternationalWomensDay.

“I see continually how the highest good is eclipsed by the violent or disagreeable forms which contain it.”

1849: Dr. Elizabeth Blackwell becomes the first woman in the U.S. to earn a medical degree.

Through much struggle, Dr. Elizabeth Blackwell became the first woman in America to earn a medical degree after graduating from New York’s Geneva Medical College, in 1849.

“I have overcome stronger distastes than any that now remain, and feel fully equal to the contest,” she said in an autobiographical sketch. “As to the opinion of people, I don’t care one straw personally; though I take so much pains, as a matter of policy, to propitiate it, and shall always strive to do so; for I see continually how the highest good is eclipsed by the violent or disagreeable forms which contain it.”

Due to poverty and other hardships, she witnessed and endured many injustices in her life. When the American Civil war broke out, she and her sister joined in nursing efforts for the North as she was completely averse to slavery and even vowed to leave the U.S. if the North compromised on the issue.  In order to offer a practical solution for women rejected from internships elsewhere, she established the New York Infirmary in 1857. She also published several important books on the issue of women in medicine, including Medicine as a Profession for Women in 1860 and Address on the Medical Education of Women in 1864.

“The voice of humanity is with me and I must not fail. My soul is moved to help the many who cannot help themselves.”

You may have seen this photo online in the past few years, as it has made its rounds on social media many times. The photo depicts three young female doctors, Drs. Anandibai Joshi, Keiko Okami and Sabat Islambouli, at a dean’s reception at the Women’s Medical College of Pennsylvania (WMCP) in 1885. To many, both the gender and the cultural diversity is hard to believe for the time period, as at this time, women still were not allowed to vote in the United States, nor were they highly encouraged to attend college. However, Pennsylvania was founded by the Quakers who sought to escape religious persecution in England and “believed in women’s rights enough to set up the WMCP” as the first women’s medical college in the world. Of particular interest is the life of Dr. Joshi who travelled from India, compelled to practice medicine after the death of her first child. An in-depth look at her story on PRI points out that “medical care for women—even high-caste women like Dr. Joshi—was simply unavailable.” In her application letter to WMCP, she wrote:

“[The] determination which has brought me to your country against the combined opposition of my friends and caste ought to go a long way towards helping me to carry out the purpose for which I came, i.e., is to render to my poor suffering country women the true medical aid they so sadly stand in need of and which they would rather die than accept at the hands of a male physician. The voice of humanity is with me and I must not fail. My soul is moved to help the many who cannot help themselves.”

“I wake up in the morning and I ask myself, what are we going to do? We can’t let these young men die.”

1981: Dr. Dritz becomes one of the first people to postulate that AIDS was a sexually transmitted disease.
1982: She relays the first clear data to the Center for Disease Control and Prevention (CDC) about what would become the AIDS epidemic.

Dr. Selma Dritz was a physician and epidemiologist who is considered a hero in the early fight against AIDS for her role in identifying the epidemic during the first outbreaks, while it was still stigmatized in the predominantly gay communities of southern California. Dr. Dritz was born in Chicago, earned her medical degree at the University of Illinois and her master’s degree in public health at the University of Californa, Berkeley’s School of Public Health in 1967. She began her career in public health after being hired as assistant director of the Bureau of Communicable Disease Control in San Francisco in 1968, where she quickly became the go-to person for outbreaks of food poisoning, hepatitis and dysentery. In 1981, she became aware of a strange and virulent form of pneumonia as well as an unusual skin cancer known as Kaposi’s sarcoma that was sweeping through the city’s gay population.

“I wake up in the morning and I ask myself, what are we going to do? We can’t let these young men die. But they do die, and I want to weep,” Dr. Dritz told the San Francisco Chronicle, “I tried to make it clear that my job was to stop this disease, and I didn’t care what they did in bed, in the bushes, or anywhere else. My job was simply to see that they didn’t get sick.”

It was because of her grit and compassion that her patients trusted her, and she became an invaluable source for information to the CDC about how this disease was spread. She rejected the derogatory terms used for the disease until the official term—Acquired Immune Deficiency Syndrome—was created.

“The greatest challenge I faced in becoming a neurosurgeon was believing it was possible.”

1984: Dr. Canady becomes the first black woman certified by the American Board of Neurological Surgery.
1987: She becomes Chief of Neurosurgery at the Children’s Hospital of Michigan.

Dr. Alexa Canady initially wanted to be an internist, but her plans changed when she became intrigued by neurosurgery. It was a career path that some advisers discouraged her from pursuing, and she encountered difficulties in obtaining an internship. But she refused to give up, and was eventually accepted as a surgical intern at Yale-New Haven Hospital after graduating cum laude from medical school in 1975. When her internship ended in 1976, Dr. Canady moved to the University of Minnesota as a resident of the university’s department of neurosurgery, where a hospital administrator referred to her as “the new equal-opportunity package.” Nevertheless, she persevered as the first female African-American neurosurgery resident in the U.S. and became the country’s first female African-American neurosurgeon. In 1984, Dr. Canady was certified by the American Board of Neurological Surgery, another first for a female African American. Three years later, she became director of neurosurgery at the Children’s Hospital of Michigan. Under her guidance, the department was soon viewed as one of the best in the country. Since her retirement, Dr. Canady moved to Florida and maintained part-time practice at Pensacola’s Sacred Heart Hospital. She often tells students that “The greatest challenge I faced in becoming a neurosurgeon was believing it was possible.”